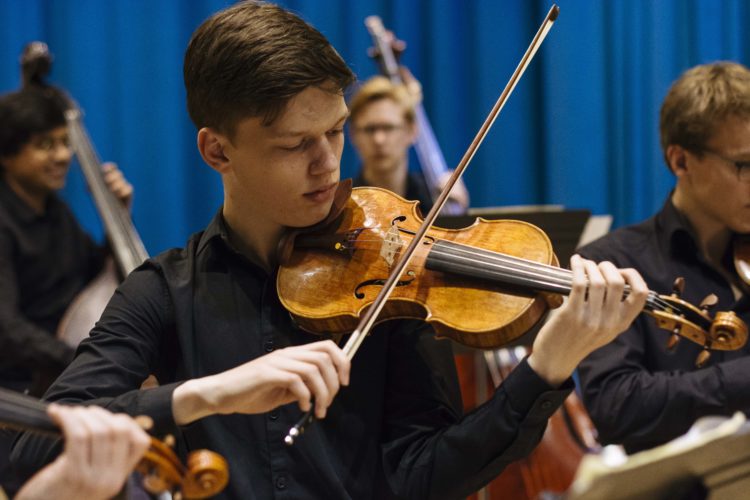 On average, CUO perform five concerts per year: two projects in Michaelmas term, three in Lent term and one in Easter term. The Orchestra performs a range of chamber and symphonic repertoire, adjusting its size accordingly (for more information, see the ‘Ensembles’ introduction). Each concert is preceded by a short, but intense rehearsal period and includes sectional coaching with a professional musician, usually a member of one of the top London orchestras. All other rehearsals are taken by the visiting professional conductor.

As well as professional-level projects during term-time, membership with Cambridge University Orchestra offers opportunities to perform at May Balls, to go on tour, and to join in with many fun social activities outside of the rehearsal room.

In a ‘normal’ year, members of CUO are placed into one of two groups. For those who rank highly at audition and desire the full CU Musical Society package – top professional artists, exciting performance venues and exhilarating repertoire – the first group will perform six concerts throughout the season: three classical-orchestra concerts and three large, romantic-sized symphony orchestra concerts. The second group – which brings you all the exhilaration only a CU Musical Society concert can provide, but with fewer commitments – play in the large concerts, but with no need to commit to the smaller ones. The rehearsals for all concerts remain the same: a play-through with our wonderful Conducting Scholar or Assistant Conductor and an intensive (but super-fun) week of rehearsals leading up to each concert. 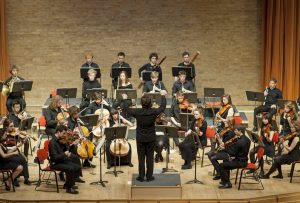 For more information on the work of CUO, please contact Isabelle Freeman.

We are very pleased to announce that we will be performing concerts this year. Whilst we are yet to confirm programmes for the entire year, please see our concerts for Michaelmas term on the “Concert and Event List”.

See below a timetable from our last full concert programme for an example of the repertoire we tend to perform.

Brahms Symphony No.2 in D major

Cambridge University Orchestra is supported by a team of industry professionals.

How competitive is it to get into CUO?
This varies every year and depends on the instrument, but CUO is the University’s premier orchestral ensemble and attracts the University’s finest musical talent. Typically, several members of the orchestra will have previously performed at a national level and will pursue careers as professional musicians when they leave Cambridge.

How is seating determined?
Seating in all sections of the orchestra for the year is determined at the auditions. There will sometimes be some rotation in the strings, which will be confirmed at the start of the year.

What kind of time commitment is involved?
CUO operates on a project-based schedule. All concerts take place on Saturdays and are preceded by a short, but intense period of rehearsals with the visiting professional conductor. Typically, a chamber concert will be preceded by four evening rehearsals during the week, plus a rehearsal on the afternoon of the concert. Symphonic concerts will have one or two additional rehearsals. There are two concerts in Michaelmas term, two in Lent term (plus the King’s Foundation concert) and one in Easter term. You can view the full 2017-18 rehearsal and concert schedule here.

Why are the rehearsals so close together? Why not have weekly rehearsals throughout the term?
The intense project-based rehearsal schedules work extremely well for CUO, because they enable the visiting conductor (who will only be able to spend one week in Cambridge) to take all of the rehearsals for their concert and work in great depth with the players. It would be impossible for CUMS to invite top professional conductors to work with the orchestra if it operated on a weekly rehearsal schedule. Project-based rehearsal schedules are also beneficial because they enable orchestra members to take part in other activities (e.g. an opera production) or catch up on degree work during their weeks off from CUO.

Will I be able to fit in CUO around my studies?
Yes. Nobody can work all of the time, and it is really important to have other activities planned to take your mind off degree work between lectures and supervisions, and to get the most out of your time at Cambridge. While the CUO rehearsal weeks are quite intense, rehearsals take place in the evenings and the total CUO time commitment for the year is just 11 evenings in Michaelmas term, 15 in Lent term and 5 in Easter term. Members of the orchestra receive their rehearsal schedules for the entire year in October, so it is possible to plan around them.

Do I have to attend all the rehearsals?
Yes. All CUO rehearsals are compulsory and you must attend unless you have special permission from the orchestra manager. We operate a strict rehearsal policy to ensure that the very high standard of the orchestra is maintained.

How sociable is CUO?
Very! The orchestra’s Social Secretary is responsible for organising social events, such as dinners and formals, as well as regular after-concert parties. Pre-rehearsal dinners and post-rehearsal pub trips are frequent and encouraged. The Orchestra is made up of a variety of undergraduate and postgraduate students from all kinds of academic backgrounds, and it is a great way to meet like-minded musicians from across the University.