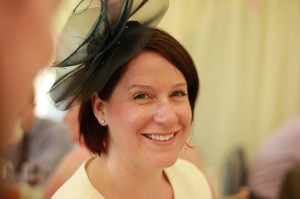 Jessica is a year 2 Oncology PhD student. She hopes to become a consultant oncologist whilst still having time to sing in a good choir.

I have been a member of the chorus since Oct 2012 – I auditioned when I arrived in Cambridge at the start of my PhD. The chorus was recommended by a school friend who did her undergraduate degree here – we had sung in choirs together at school and when she heard I was moving to Cambridge she told me I had to audition. I was nervous, having not sung alone in front of anyone since school, but the audition was a very pleasant experience. Stephen [Cleobury] was very kind and put me at ease – and I could see people punting on the Cam and cows through his window in King’s College – it was a unique experience!

What have been the musical highlights from your time with the Chorus so far?

My musical highlight was Mendelssohn’s Elijah in King’s College Chapel last term – such an uplifting work – thoroughly enjoyable singing. I also have sung in the combined choirs concerts for the past 2 years which have been amazing – the Tippett (A Child of Our Time, performed in January 2014) sounded incredible and we really elevated the performance level on the night – the atmosphere after the last note was palpable – and emotional.

What are you particularly looking forward to about your upcoming performance of Handel’s Dixit Dominus with conductor Ralph Woodward?

Dixit has been a real challenge – only Handel writes pieces with as many notes as this! The fugues are furiously exciting. We are singing in “scrambled” formation with the voice parts mixed up, rather than sitting in sections. This is helpful for hearing the other parts and how my part (soprano 2) fits in with everyone else, and weaves around them, both in
terms of rhythm and melody. Initially we were nervous about losing the support of other members of our voice parts surrounding us, but Ralph (Woodward) encouraged us to give it a try. In rehearsal last night it sounded fabulous – really well-blended, and as a member of the choir it enhances the experience as we can hear exactly what is going on much more clearly. I am looking forward to hearing the Baroque sound of the orchestra on Sunday – and singing in West Road – I have listened to orchestras there, but have not performed there myself.

What does the rest of the 2013/14 season have in store for the Chorus?

Following this concert we will be preparing for our tour to Lisbon in April with Ralph. We will be singing:
The 5 spirituals from Tippett’s A Child of Our Time
Stanford 3 Motets
Whitacre’s Sleep
Todd “Christus est Stella”
John IV of Portugal, Crux Fidelis
Duarte Lobo Pater peccavi
Purcell Thou knowest, Lord
Purcell Hear my prayer

We will be performing unaccompanied in a couple of beautiful venues,
Cloisters at San Jeronimo and Santa Engracia church (see below).