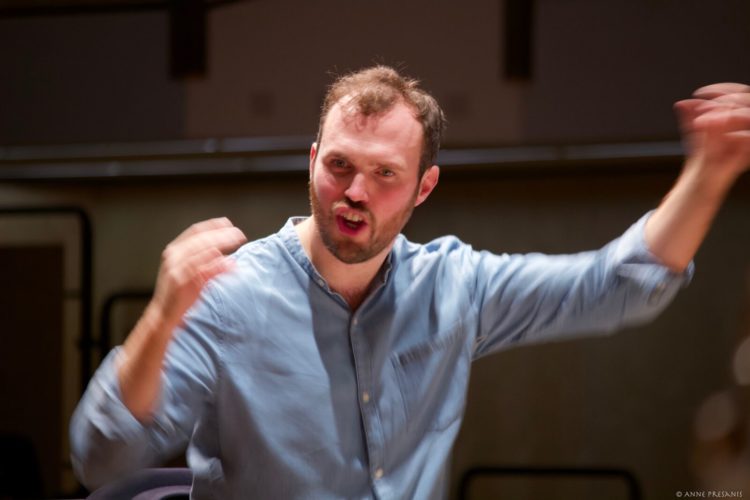 Cambridge University Symphony Chorus (CUSC) is delighted to announce that Richard Wilberforce has been appointed as Musical Director.   He succeeds Stephen Cleobury CBE, who has retired after over 30 years in post.

Richard Wilberforce is currently Chorus Master of the Leeds Philharmonic Chorus, and conducts both the Jeune Choeur de Paris and Maîtrise de Paris.   He also teaches choral direction at the Conservatoire à Rayonnement Régional de Paris.   He was previously Director of the Hallé Youth Choir, working closely with Sir Mark Elder, and of the acclaimed chamber choir, the Exon Singers.  Richard is a distinguished choral composer, and his works have been broadcast and recorded, as well as performed in many of Europe’s most prestigious concert and ecclesiastical venues. His works are published by Boosey & Hawkes, and RSCM Press.

Lawrence Wragg, the President of CUSC, said “We had an exceptionally strong and talented field of applicants for this post.   Richard emerged as the first choice from this group of extremely able conductors.   We all enjoyed working with him on the recent performance of Handel’s Israel in Egypt, and are looking forward enormously to his leading the Chorus forward.”

Richard Wilberforce said “I am honoured to have been chosen to take the helm of this great and venerable choir, and the opportunity to build on the extraordinary work of my illustrious predecessors is a truly exciting prospect.  I am thrilled to be returning to Cambridge University, where my musical journey started, and am eager to throw myself into delivering concerts with these fine musicians of which the University and City can be proud.”